I got a visit from an Israeli government agent last night. The bastard ignored the intercom, slipped through the security gate, and came right up to my front door while my wife and kids were eating dinner. He was just a scrawny, drug-addled messenger. I told him to piss off.

Sure it sounds ridiculous, but that's how these things go sometimes, isn't it?

Odd that Tim Blair was taking a shot at me on the same day. Has my little blog created another disturbance in The Force or something? 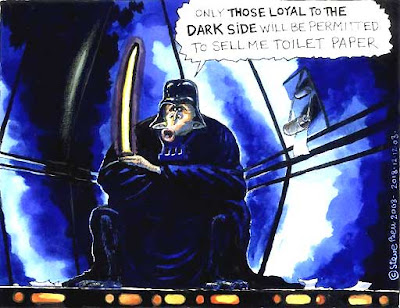 Was it my talk of Rupert's Zionist Crusade? The repeated calls for a Royal Commission into our role in the illegal invasion of Iraq (I note Blair's minions have been desperately clicking the "traiter" option on my blog poll, which was previously running at about 70% in favour)? Or maybe it was that Op-Ed I submitted to a major national newspaper?

Or maybe it was my oft-repeated suggestion that Mossad knew about the 9-11 attacks. Hey, I'm only repeating what FOX NEWS said!

It's ironic that even Al Quaeda today is desperately trying to argue against that same "Conspiracy Theory":

One questioner asked about the theory that has circulated in the Middle East and elsewhere that Israel was behind the 2001 attacks on the World Trade Center and the Pentagon.

Al-Zawahri accused Hezbollah's Al-Manar television of starting the rumor. "The purpose of this lie is clear — (to suggest) that there are no heroes among the Sunnis who can hurt America as no else did in history. Iranian media snapped up this lie and repeated it," he said.

"Iran's aim here is also clear — to cover up its involvement with America in invading the homes of Muslims in Afghanistan and Iraq," he added. Iran cooperated with the United States in the 2001 U.S. assault on Afghanistan that toppled al-Qaida's allies, the Taliban.

If the enemy of my enemy is really my friend, then things are a lot more complicated than they seem.

(Of course Juan Cole pointed out this Bush-Iran convergence last week, US intelligence agents have already admitted that secret talks with Iran have been going on for 5 years, and now even the New York Times is writing stories about it. So what was all that talk about bombing Iran? Just another Cheney ruse to drive up the cost of oil? Is Hillary in on the game?)