You too can become a World Citizen. 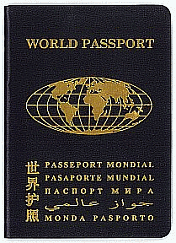 Davis is a former WWII bomber who renounced his American citizenship in Paris in 1948 to become a "citizen of the world." He founded the International Registry of World Citizens in Paris in January, 1949, with support from writers Albert Camus and André Gide and the Abbé Pierre.

For an 87-year-old, Davis also has a pretty witty blog:

Hello. (Yawning) What's up Garry? This is a helluva time to call.
But Madame, you practically ran on the 3 am call.
All right, all right! So what's so important it disturbs my sleep?
Well, Madame President, I thought you should be the first to know.
Know what? This better be good.
The World Parliament in Tasmania just passed a resolution outlawing war ten minutes ago.