Time To Get Out Of Afghanistan 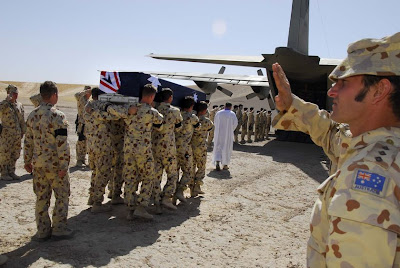 It appears [ now confirmed: see below] another Australian soldier has been killed in Afghanistan, where things have long been going from bad to worse. 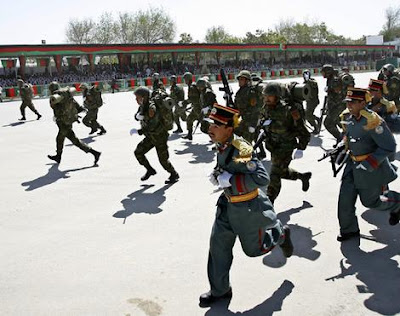 The Reuters photo above shows Afghan troops racing from a Kabul parade ground yesterday when the Taliban launched a brazen attack: bullets struck the back of a stage where Karzai was standing with the British and US envoys.

Juan Cole has video and reminds us that the Central Asia gas fields explain Bushco's interest in Afghanistan.

'We have to make sure that when a Talib comes to Afghanistan ... he is safe from arrest by the coalition.'

Karzai is facing re-election and this time he cannot win by pushing the Western propaganda line. Like Iraq, this war is over: our governments and media elites just haven't admitted it yet.

"He died during the conduct of a patrol which was engaged by Taliban extremists in Oruzgan province approximately 25km to the south-east of Tarin Kowt. The engagement in which he died was characterised by a heavy exchange of small arms fire and rocket propelled grenades. Four other soldiers were wounded by small arms fire in the same action."

Tarin Kowt is the capital of Oruzgan (also written "Uruzgan") province in southern Afghanistan. It is a small and dusty town of about 10,000 people, with some 200 small shops in the city's bazaar. There are no medium- or large-scale economic enterprises in the city. The provincial governor, currently Asadullah Hamdam, lives and works in a compound adjacent to the bazaar. There is also a population of about 2000 Arabs mainly of Iraqi origin in the town.

Just a little visual reminder of why Aussie troops are (still) over there: 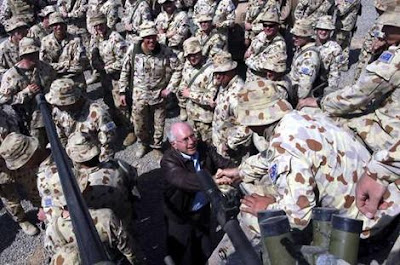 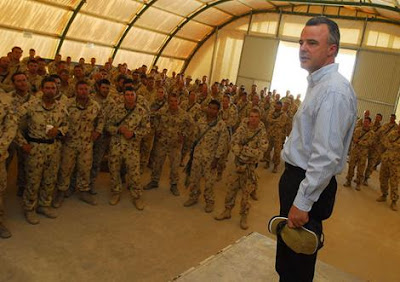 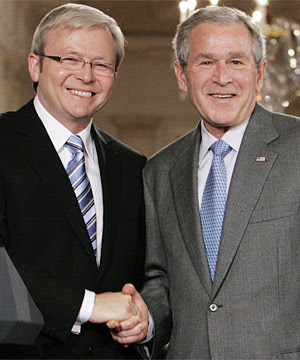 LATER: Kevin Rudd explains why we still in Afghanistan:

" We are there because a failed state was giving open succour and support to a global terrorist organisation - al-Qaeda - which then attacked our ally the United States on September 11, 2001, and in the process murdered 3,000 people. Nothing has changed since then."

We have been there for six years. If it's true that "nothing has changed" then we should be asking "Why not?". But things actually have changed: the Taliban has been routed from government, the US has installed a former Unocal oil executive as a puppet president, the people of Afghanistan have realised that Western governments are totally indifferent to their poverty-stricken plight, and now we come full circle: the Taliban are resurgent, and what has all our blood and money brought us? Nothing.

Rudd says Australian commitment "is not a blank cheque and it will be subject to rolling review." Roll on the reviews, please.
at 2:59:00 pm