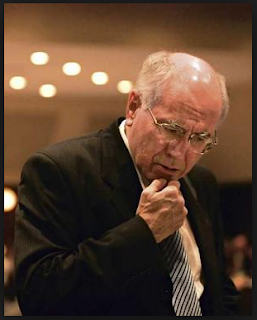 Why does former Australian Prime Minister John Howard still feel psychologically compelled to defend to the single greatest stain on his God-awful record? We can only wonder. But it is telling that today he has chosen to speak at the US-friendly, Zionist-sponsored Lowy Institute, and published a leaked extract of his speech in fellow warmonger Rupert Murdoch’s flagship newspaper.

Clearly, Howard is still working with a safety net while addressing his right-wing circle jerk of admirers, even as he pretends to argue for a broader public consensus. It is a measure of the gutlessness of the man. 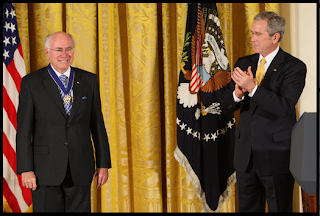 The headline is pathetic:


“Errors were made but we did not go to war on a lie”.

Given that Cheney created the secretive Office Of Special Plans specifically to fool the public into accepting the invasion, even the headline is a lie. And did the Murdoch hack who wrote that headline even realise that “errors were made” is now a ridicule-inducing meme, or was it Howard’s own choice? 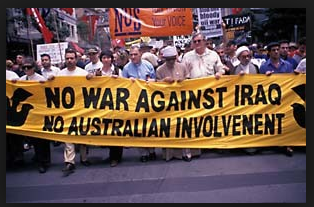 The first sentence is another blatant lie:


“The belief that Saddam Hussein had weapons of mass destruction was near universal.”

No it wasn't. There were many (including Iraqi defectors) who argued that Saddam no longer possessed WMDs. I read about them for months, but their voices were deliberately ignored. The UN team on the ground in Iraq were not even allowed to finish their fruitless search for WMDs (as former Australian Prime Minister Malcolm Fraser notes). Disapproving UK weapons inspector Dr David Kelly was ultimately silenced. 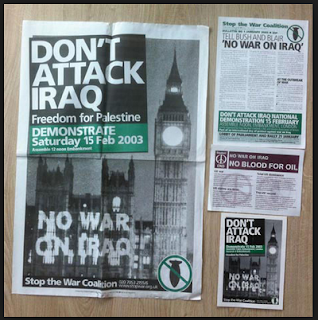 Despite all the media hype, despite all the political scare-mongering, millions of peaceful souls still marched around the world in a desperate attempt to stop what always seemed an inevitable war. Personally, I didn’t bother even marching because it was so bloody obvious – even to me, a middle-aged nobody searching for facts on the Internet - that Saddam did NOT have the capability to use WMDs. I just couldn’t believe the bastards would be stupid enough to invade Iraq. I was wrong. 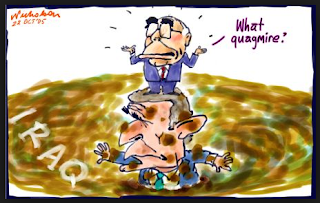 Howard then cites his own half-arsed 2004 Flood inquiry as support for his criminal act. But even Philip Flood described the evidence on Iraq’s WMD as at best ‘thin, ambiguous, and incomplete’. Howard then quotes Kevin Rudd (who ousted him as PM) saying Saddam’s WMDs were "an empirical fact" in late 2002. But we already know the ALP supported the war, even after Rudd took control, so what’s the point of that quote?

The next paragraph reveals Howard’s gambit: he wants to talk about “the party political division in Australia in the lead-up to the military operation in Iraq”. As if the false dichotomy of domestic Australian politics is the only argument that matters when millions of Iraqis are dead, wounded and displaced! 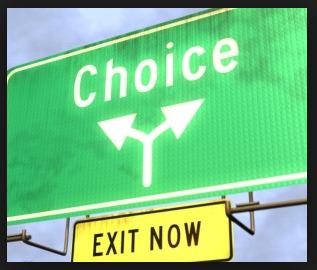 Let’s be clear: if an ALP Prime Minister had ordered the invasion of Iraq, they would deserve the same condemnation as Howard. But he was the one who did it. Similarly, if Howard’s Coalition had been supporting the invasion from the Opposition benches, they would deserve condemnation just as much as the ALP does today.  No wonder neither party is keen for a real inquiry!

Howard skirts around whether another UN Resolution was really required, as if that would justify his war crimes. But he knows that:

(a) the USA had no chance of getting another resolution, and
(b) former UN chief Kofi Annan has stated that the war was “illegal”.

So he pretends that his government “never saw the obtaining of a fresh Security Council resolution as a necessary legal prerequisite”. But of course he doesn’t try to explain why the UK government sought such advice from their own Attorney General, who advised that a further resolution was necessary, and then famously changed his mind under political pressure. Are we supposed to presume that Howard knew nothing about this? 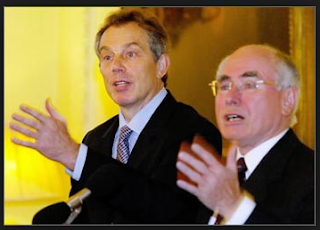 The only critics to whom Howard will concede any ground at all are the “so-called realists” from the H.W. Bush administration, people like Brent Scowcroft, who argued that an invasion was unwise whatever the situation with WMDs. But Howard insists even they were wrong, on two counts:


“To start with, Saddam was not being contained. He had been thumbing his nose at the world body and its WMD strictures on him. The other flaw was that the realist approach did not accommodate the huge psychological shift in US attitudes following 9/11.”

Both these arguments are fatuous. A dictator “thumbing his nose” at other nations does not warrant a pre-emptive invasion. Nor does the psychological state of a nation that has been deliberately terrified by its own government and media for months (remember: even Little League baseball games were cancelled after 9/11/01 – and hey, who was behind those October 2001 anthrax attacks anyway?). 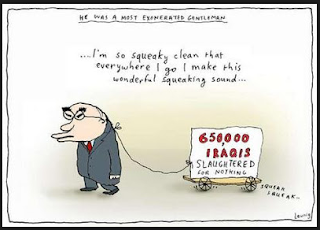 Howard might as well be talking about his own psychological state after 9/11. He met George W. Bush and dined in D.C. with Rupert Murdoch on the day before the attacks. On 9/11, while bodies were still burning in the World Trade Center, Howard pledged Australia’s complete and unconditional support for any US military action whatsoever:


“Australia will provide all support that might be requested of us by the United States in relation to any action that might be taken.”

In retrospect, it is hard to believe Howard ever flinched from that open-ended invitation. But still he condemns those who question “the integrity of the decision-making process” and “the professionalism and integrity of intelligence agencies.” Newsflash, Johnny! The decision makers were wrong. The “sexed up” intelligence was wrong. The consequences were disastrous. So where is the accountability?


“Some of their key assessments proved to be wrong,” argues Howard, “but that is a world away from those assessments being the product of deceit and/or political manipulation.”

So there is no accountability. And we are back to the same old question that plagues the neo-cons and their associates: were they evil or just stupid? And again the proof is right there in the lack of accountability. Mistakes get punished. But deliberate mistakes, condoned at the highest levels, are rewarded with promotions. John Howard even says he wants disgraced US general David Petraeus to return to public life – ‘nuff said? 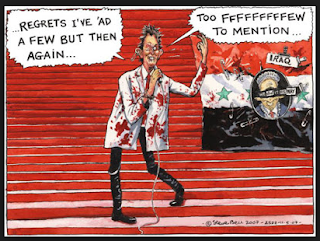 Howard then waffles on about fictional Zero Dark Thirty interpretations of history, Paul Bremer’s mistakes in the post-war period, and Bush’s desperate political “surge” PR exercise.  It’s all waffle, of course, muddying the waters and dispersing the blame without ever really pointing fingers. Nobody is really to blame. The destruction of Iraq was a team effort. We meant well. Trust us.


“Iraq today is not a full democracy” admits Howard.

In fact, it’s an endless fucking nightmare. But Howard still talks about the Iraqi people’s much-vaunted “thirst for freedom”. That same “thirst” was used to justify the invasion in the first place, rremember? Now it drives whatever happens to them next. We're "handing over", and it's the Iraqis' fault if things go wrong from here. Don't look back. 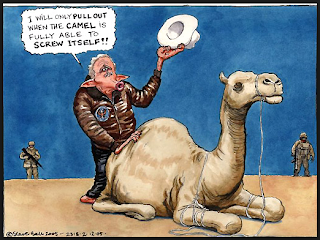 Finally, it’s time for some damned lies statistics! The Iraqi economy grew by 10 per cent last year, says Howard (never mind where it was the year before).  Per capita GDP is now "markedly higher than it was before Saddam was removed” (of course many of the “per capitas” are dead, or living abroad in refugee camps). And most importantly:

That’s right. The oil is flowing. And even though Russian, French and Chinese companies are getting first dibs, US oil companies are finally getting their hands on Iraq’s black gold. Which was, after all, the whole point of the exercise. No wonder many in Washington still believe the war was a success. 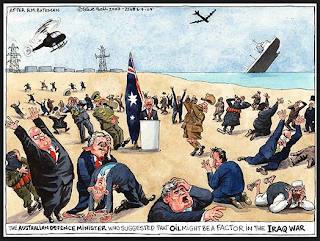 If you have bothered to read this far, I thank you. I will leave you with John Winston Howard’s closing paragraph, and let you savour it for yourself:


“Unlike most of its region, Iraq's polity has not been roiled by the Arab Spring. That must have something to do with the democratic framework that has been established there in recent years.”